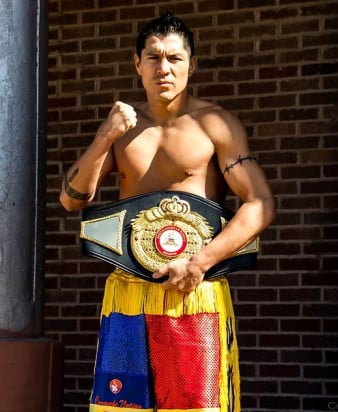 He has also been recognized as 2011’s Top 40 under 40 Native American Entrepreneur, Goodwill Ambassador Award from the World Boxing Council for his fight against diabetes, and the American Indian Exposition’s 2012 Celebrity Indian of the Year award.

Comanche Boy’s showmanship didn’t stop there – he was well known for knocking out his opponents with his power punching, and especially for his post knockout victory war dance.

Tahdooahnippah built a nine-year 31-0 boxing career before his first loss. He fought four ESPN fights including one undercard, HBO pay per view fight at the MGM Grand in Las Vegas, Nevada. “This has been the highest honor I carried as a professional fighter and I did my best representing my Native American people,” said Tahdooahnippah.

“Comanche Boy” retired from boxing in 2016 with a record of 34 wins, 3 losses, 3 draws and 2 no contests. Today he continues to fight for his people as Acting CEO of Comanche Nation Enterprises, CEO of Comanche Nation Construction and CEO of Numunu Staffing. He works to diversify and grow the tribe’s economy, develop the tribe’s workforce, actively employ and mentor’s tribal members, and develop future Tribal leaders. The companies he leads employ a nearly 70% Native American staff.

To learn more about NAIAHF and meet the other 2022 inductees, visit them at www.naiahf.org.